Our sailing adventures: around the Bill of Portland in thick fog after a passage across Lyme Bay from Torquay

We were nervous and excited to be on passage via Portland Bill, and when thick fog descended we found reserves of seamanship we didn’t know we had.

10:30 Amneris is ship-shape again, and we are departing Torquay under engine. The wind is a light SSE, and there’s slight mist.

11:30 Off Ore Stone, with the engine off and sails up. The wind is so light that we’re doing only around 2.5 knots over the ground. There’s a huge (for us) fish farm here, which looks like it might be very difficult to see in heavy weather at night.

13:30 Annoyed by a small commercial power boat from Brixham that refused to give way. No day signs up to make us think we wouldn’t have priority, but we changed course to go round him anyway, with a certain rhyme in mind: “Here lies the body of John O’Day, who died maintaining his right of way. He was right, dead right, as he sailed along, but he’s just as dead as if he’d been wrong”.

16:30 Misty, not misty, misty, not misty. Apart from weather that won’t make up its mind, we notice that there doesn’t seem to be much interesting wildlife in Lyme Bay.

19:15 Engine off, as belt just broken! With almost no wind, this might take several weeks…

21:00 The sun has set, sea is dead calm, and visibility is dropping rapidly and alarmingly. Not just regular night-time stuff, but thickening fog. Heard what can only have been the fog horn from Portland. Well, belt or no, we’re going to need the engine. Here we go…

00:00 Visibility down to a few metres. Portland lighthouse should be visible for about 20 miles, but we’ve seen nothing of it. 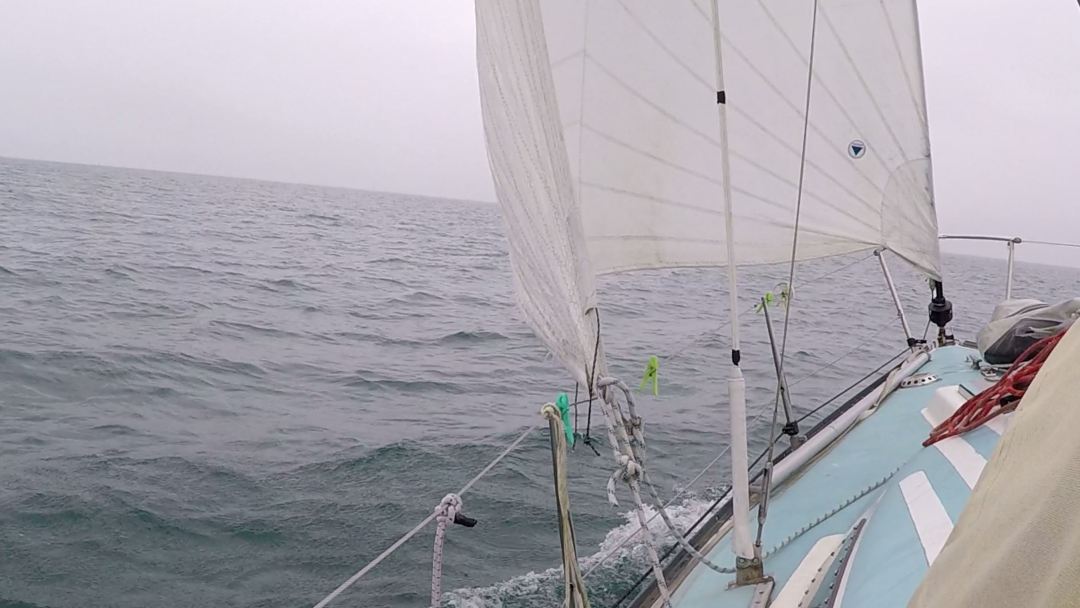 03:00 With no belt, the engine can’t charge the batteries (and of course the solar panel isn’t exactly designed for night-time operations). Result – we’ve got no navigation lights. Not that it makes much difference, as we can see absolutely nothing. Still, Aleksandra is up on the bow with our most powerful torch, to at least give some kind of light. Still no sign of Portland light, or of the Shambles buoys – the latter of which are definitely within sight under normal situations, just to port. In my head I’m running through the tide diagrams for the Bill and hoping that I didn’t make any mistakes in calculations for this passage. If I did, we won’t see anything to tell us about it until it’s too late.

03:30 Called Portland Harbour on VHF to let them know that we’re on the way in, warning about problem with lights in case they need to alert other vessels to watch out for our torch. Permission to enter and proceed to marina. I’m steering off where I think the entrance should be, so I can use the lights (should they ever appear) to correct the course and guide us in. We’re both putting an awful lot of faith in our passage plan and pilotage notes, and the accuracy of the plotter on our tablet. They all need to be good now. Exceptionally good.

04:00 Lights marking the entrance in the harbour wall appear, first red, adjust course, then green; a little bouncy across the entrance – and we’re in!

04:30 Still like sailing through a thick cloud on a lake of glass. We’re more of less following the marker buoys up the channel to the marina, but they don’t appear until we’re nearly upon them. We have company – a large, lone dolphin. Could this be Dave?

05:00 Tied up on Sailing Academy pontoon, as we could barely see the boats, let alone the pontoons in the main marina. Even sailing past the mooring field was eerie; hulls and masts appearing briefly before being swallowed up again in the fog. We’ll get a couple of hours sleep, then move round when the sun is properly up and we can see something. Dave stayed with us all the way.

10:00 Portland Marina proper. Well-supplied, but isolated. Price not bad at around GBP 25 per night.